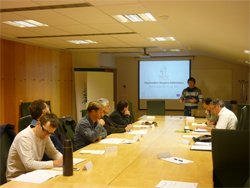 One of two main goals of the meeting was to present the StarTree to stakeholders. The second was to give the stakeholders a chance to talk about their needs and expectations from StarTree. The Case Study responsible Anže Japelj has given a presentation on the scope, aims and expected deliverables of StarTree. Special focus was put on stakeholder engagement in the project, more specifically which are the mandates of the Regional Stakeholder Group. The attendees have been excited on the project's concept, which is very end-user oriented and practical. 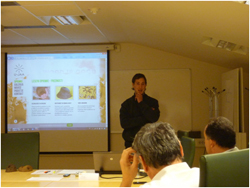 After the initial presentation, two private enterprises were given a chance to present themselves and to express their motivation to actively participate in the RSG and the project. Both are active in area of NWFP or related. The first one, U-JAA is a small enterprise producing climbing consoles, made out of tree trunk boles or parts of branches (presented by Simon Možina). The company won a few innovation tenders and patented the product on a national level. Their main challenge is to penetrate to new, international, markets. The firm Symbiosis (Jurij Jerele) has set a pilot plantation for truffle production in the SW of Slovenia. This is all quite new in country's respect. The entrepreneur's goal is not only to grow and sell truffles, but also to market inoculated oak seedlings.

The final part of the meeting was marked by an intensive discussion where all participants took part. The representative of Symbiosis highlighted the lack of incentive from the government to foster truffle production in Slovenia. He also pinpointed the fact that neighbouring countries have already recognized potential positive effects it can have on job creation and/or income diversification of rural population. 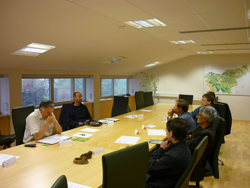 The representative of the ministry replied and offered a separate meeting for the interested where options for subsidies would be investigated within current CAP or LEADER measures. Furthermore, the ministry would appreciate if StarTree would provide an overview of the current status of legislative on NWFP across EU. The Slovenia Forest Service's (Dragan Matijašić) feels the project could continue work where SylvaMed project has ended.

Finally, the Slovenian Mycological Association expressed interest in networking with other associations in countries covered by StarTree consortium. All attendees expressed will to participate further in RSG and suggested to extend it to beekeepers and hunting associations.

The meeting ended with a coffee break and informal "continuation" of the discussion.