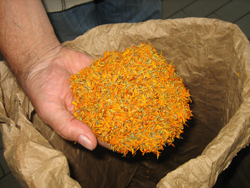 In Serbia, there are more than 700 plant species that are considered as medicinal and aromatic. Among them, 420 are officially registered as Medicinal Aromatic Plants and 279 species are marketed (Dajić-Stevanović, Ilić, 2006). The most common wild-harvested herbs are St. John’s wort, yarrow, hawthorn, elder, primrose, linden, sweet basil, nettle and balm. Economically, the most important wild mushrooms are ceps and chanterelles. The most important forest fruits are wild bilberries, blackberries, strawberries and rose hips (2008).

In 2006, the total value, without extraction costs, of the berries and plants was 5.47 million EUR while for all mushrooms the total was only around 504,000 EUR. Some authors state that the role and importance of NWFPs has been underestimated by forest authorities and other official institutions and sometimes even ignored when forestry investments are made. One of the reasons for this situation can be the lack of information on the significance and potential of NWFPs.

The total area of the statistical region of Šumadija and Western Serbia is 2,648,300 ha and it encompasses 10 forest areas. Forest area is around 933,770 ha (www.srbijasume.rs) or around 35%. Because of the richness in forests, NWFPs collection has a long tradition within the rural population in this region.