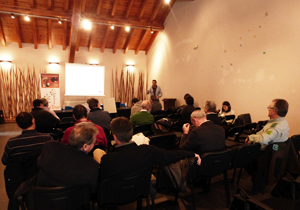 On February 11th, 24 representatives of public and private institutions of the NWFP sector gathered at the Tourism Office of Pallars Sobirà in Sort (Catalonia) in order to carry out the second StarTree RSG.

This meeting aimed at:
- explaining the state of the art of the NWFP sector through the presentation of the main findings of the project in terms of economy, legislation and innovation in the sector of NWFPs and presented by the researchers of the project;
- promoting debate between the different stakeholders regarding the need for a regulation on mushroom picking in Catalonia and how this fits with tourist activities. 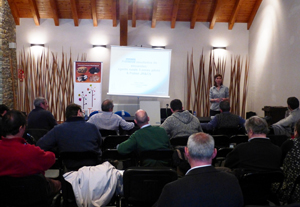 During the morning, the results of pilot tests on mushroom regulation in different public-owned forest lands belonging to the Catalan Government of Generalitat were presented. Joaquim Rodríguez, responsible of Planning of the Environment at the Department of Agriculture of the Government of Generalitat, exposed the results of the omnibus survey about mycological regulation and explained the experience of the 3 pilot zones established in 2014: Mas de l'Orri (Natural Park of Alt Pirineu), Els Ports and Setcases (Ripollès). The omnibus survey enables us to know the opinion of Catalan society in general whereas the online subscriptions and the survey realized by rural agents brings new information regarding the profile of mushroom pickers in these new pilot zones.Then, the Director of the PNIN of Poblet, Anton Vallvey, presented the results of the pilot test for the 2014 campaign in the area of Poblet (Catalonia) which has been under regulation since 2012. Finally, Elena Górriz (CTFC) introduced a qualitative study dealing with the perception of the decision-makers in Poblet, as well as the statistic analysis of the acceptance of the mycological regulation among a significant sample of mushroom pickers. The analysis was based on the surveys carried out in the new pilot zones. 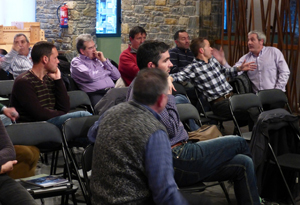 During the afternoon, the President of the Regional Council of Pallars Sobirà, Sr. Llàtzer Sibís, introduced the roundtable on mushroom regulation and mycotourism. Juan Martínez de Aragón (CTFC) presented the experience of the private-owned forestland of Monegal, Álvaro Hernández (Government of Aragon) explained the implementation of a brand new Decree which regulates the harvesting of mushrooms in the whole region. Ramon Aytés, owner of the Hotel Pessets (Sort), defended his position from the touristic point of view and Josep Poch (Alins' City Hall) explained the experience of the Woods of Viròs.

Both the morning presentations and the roundtable triggered intense debates on mycological regulation. Although all the stakeholders agree on working on a mushroom regulation for all of Catalonia, they don't necessarily share the same opinion regarding the means to do so neither the contents of the future law. The presentation of the Decree in Aragon set off a lively discussion regarding the difficulties to launch a regulation which would be flexible and fair enough if we take into account the different profiles of mushroom pickers and the importance of distinguishing between the leisure activity and the commercial one. 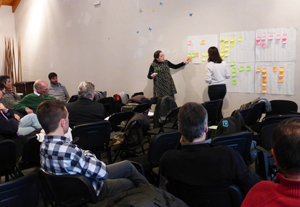 Finally, Camille Evard (Foreco) carried out a workshop for the Catalan Action Research. The main goal is to explore together with policy makers and SMEs the enhancement of  business support for enterprises in the sector of mushrooms and truffles. The stakeholders have been able to debate and work on the strengths and weaknesses of the mushroom sector from the business point of view and at the same time, they brainstormed concrete actions in order to strengthen the assets or to overcome the weaknesses of the mushroom companies in the following categories: the product itself, the market, the legal framework and local development.