HomeNews & EventsPotential of acorns discussed in the Alentejo region

Potential of acorns discussed in the Alentejo region

On 20 March 2015, a symposium was held at the Herdade do Freixo do Meio, in Alentejo region to discuss acorns and their importance as food for humans as well as animals. The organiser of the event, Alfredo Cunhal Sendim, has been working on recovering the Montado system in the region by valuating the acorns of cork oak and holm oak. 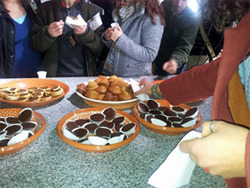 When the owner of the Herdade do Freixo do Meio, Alfredo Cunhal Sendim, decided to organize the symposium "Acorn: the future of a food with a past" he thought that there would be some interest in the topic, but the final crowd surprised him – many people showed up using acorns on so many different products. What at first sight seemed to be just a relaxed gathering of people interested in the subject, was in reality the culmination of a long work started by Alfredo Cunhal Sendim. He has been able to recover the traditional Montado system in the region, in the Herdade do Freixo do Meio, by valuating the acorns of cork oak and holm oak.

The partnership with the Escola Superior de Biotecnologia of the Catholic University of Porto has been crucial, since they studied the nutritional and functional characteristics of acorn and reached surprising conclusions. With the participation of Instituto de Biologia Molecular e Celular da Universidade do Porto a study was carried out with the chlorogenic acid, which led to the conclusion that the acorn is rich in components that are used in the treatment of degenerative neurological diseases.

A question arises if the use of acorns start to be successful for new uses: will Portugal have enough acorn to respond to such new demands? Alfredo Cunhal Sendim has no doubts, and mentioned a preliminary study made by Miguel Sottomayor from the Catholic University of Porto, where data show that 55% of acorns that exist in Portugal are not used, especially in the Northern regions and the Alentejo. It is estimated that the economic potential is around EUR 13.3 million. Thus, we should continue to work for recover the importance that the acorn had in the past in Portugal.

Read more about the event in the local newspaper in Portugese.