Knowledge exchange at an exceptional marketplace

One of the cornerstones of the StarTree General Assembly meeting was the organisation of a „market place“, in order to facilitate the exchange of knowledge and experiences between science and practice. The market place was first of all not meant to simply present the products but rather to provide the floor for discussion between the regional representatives and the project consortium partners. 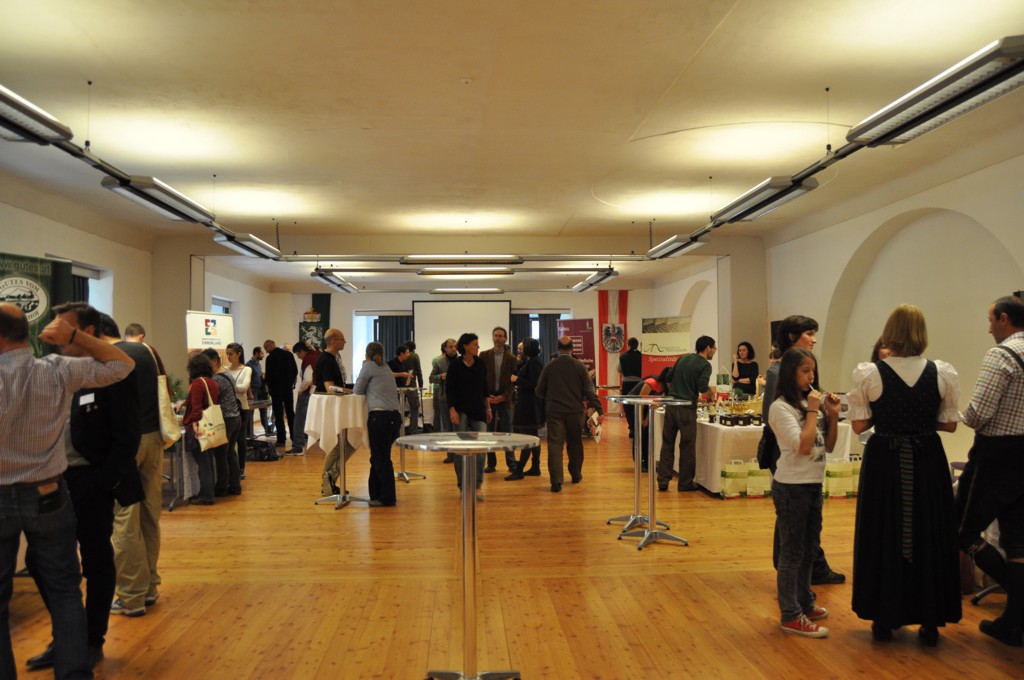 The following “market stands” were organised in strong collaboration with members of the Styrian Regional Stakeholder Group and their supporters:

At the beginning of the “Knowledge Exchange Event”, as it is entitled by the StarTree project itself, Bettina Wanschura (PlanSinn GmbH, moderator of the meeting) gave a short general introduction on the setup of the event and started interviewing the representatives of each stand. Main topics addressed during this introductory round included: i) general information on the organisation/association/institution, ii) historical development iii) objectives, and iv) the NWFP nexus. In the following the participants had the opportunity to explore the market place on their own and visit the stands to gather further information, to enjoy the variety of culinary delights offered or simply just to admire the the multiplicity of NWFPs from the region. 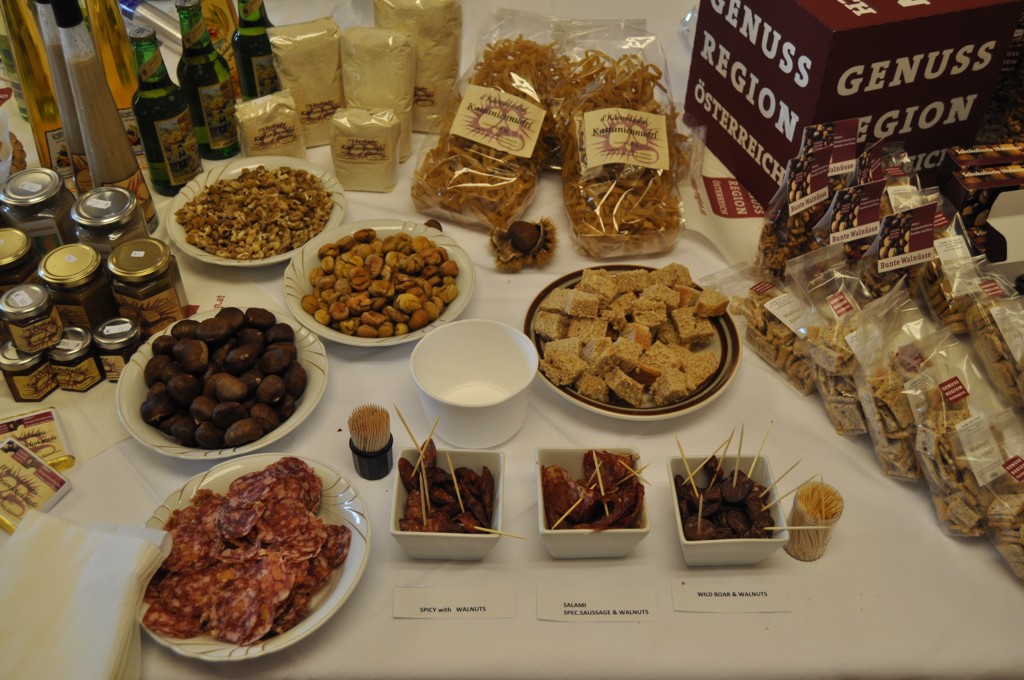 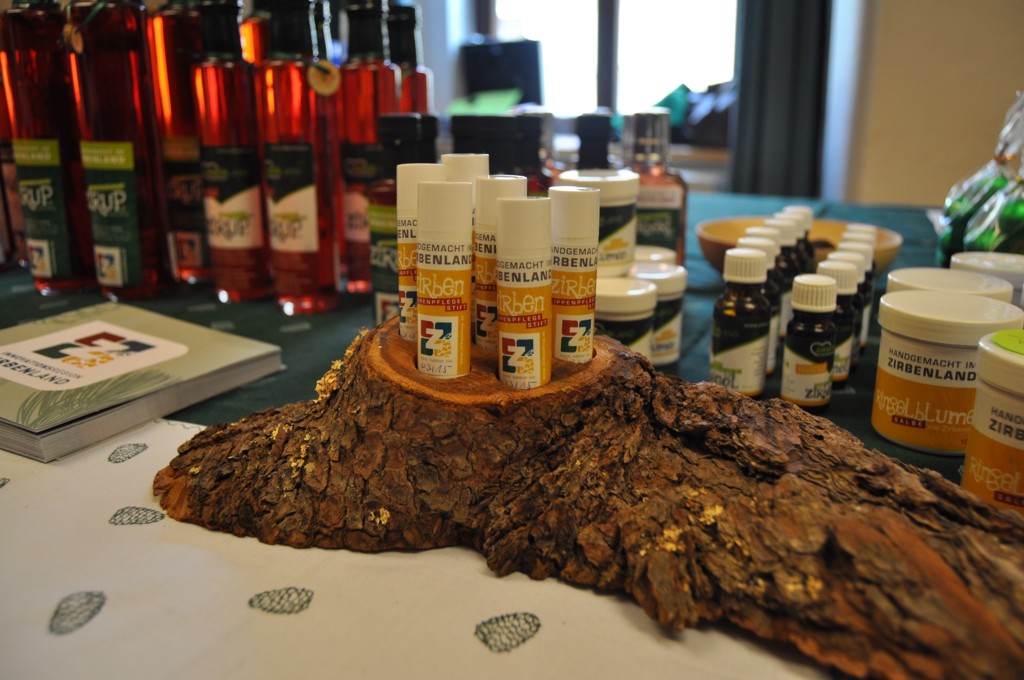 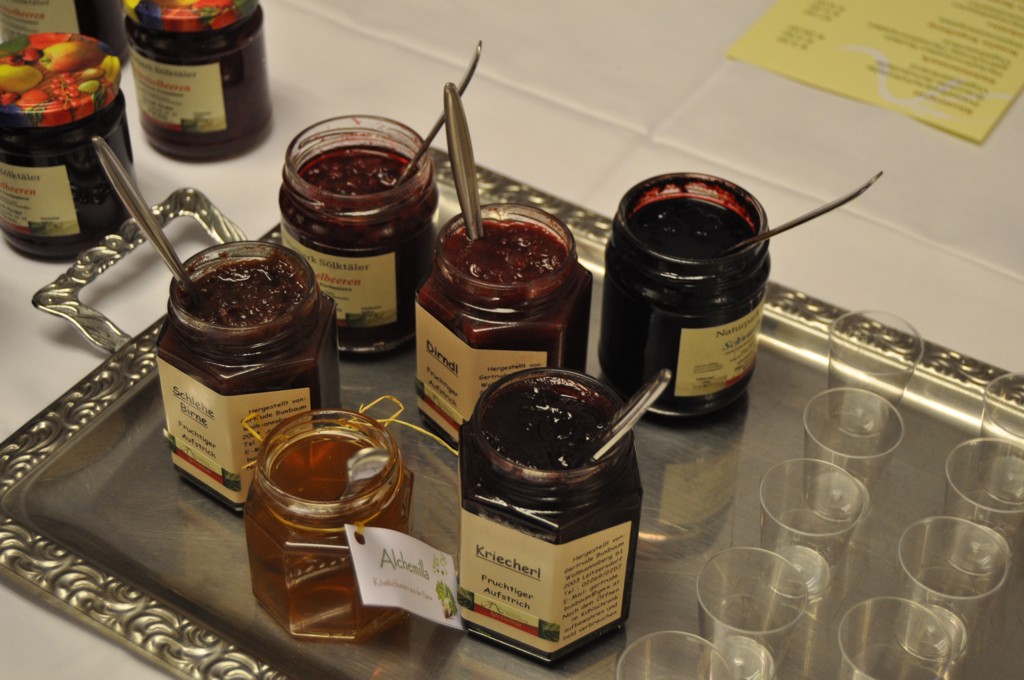 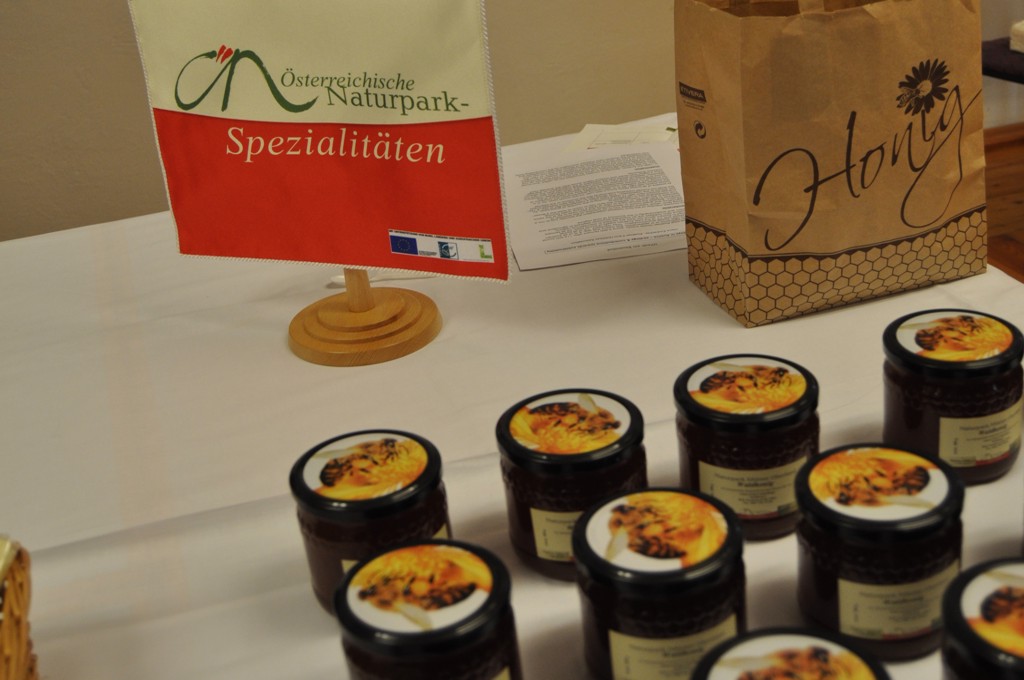 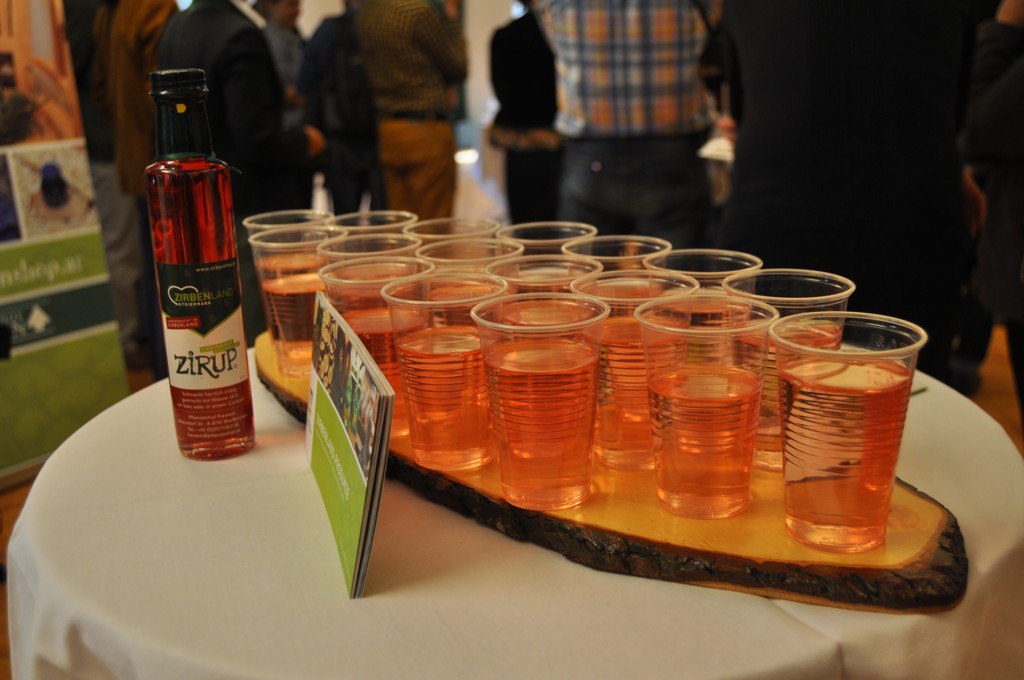 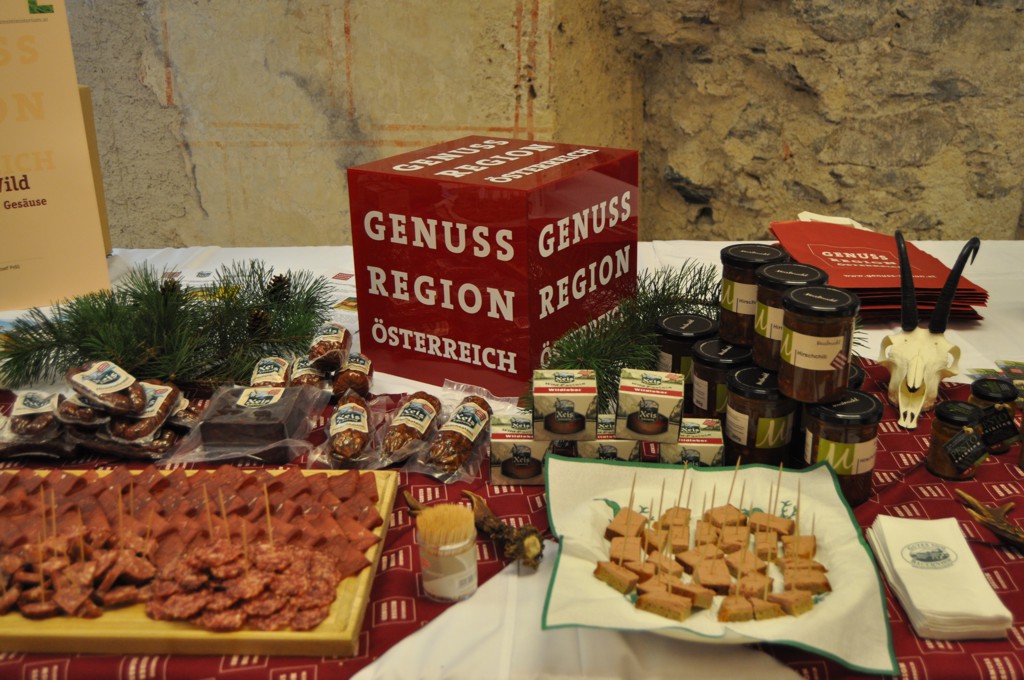 For the common discussion after the market place both the researchers and the representatives from practice were asked what were the lessons learnt today:

-          What works well in the region of Styria when it comes to the marketing of NWFP?

We have seen a number of examples of institutional support for small producers of NWFP:

the Farm Holidays Association, the Nature Parks, the Regions of Delight and the innovative region “Zirbenland”. Other associations or regional organisations often use a common label and do the professional joint marketing for the members as well. But most of them are not only a joint marketing platform, the participants said, they also provide other important services for the members, i.a.: transfer of know-how through information material and training courses, regular meetings for exchange of experiences among members, or the definition of minimum quality standards.

Another positive aspect was mentioned in the discussion. It seems that both traditional knowledge as well as new and innovative ideas contribute positively to the NWFP sector in the region. Furthermore, an active exchange between inside and outside the region seems to play a very important role, fostering knowledge transfer amongst actors at various levels in NWFP markets. Both a strong and living regional identity and pride, as well as an openness to new ideas and influences from outside seem to be necessary to adapt to more and more globalized market trends and remain competitive and successful. Nevertheless, it is often a matter of time that the initialisation of relevant processes ends up in a success story. For instance, the development of institutional structures such as the Farm Holidays network took decades in order to be as strong and professional as today. And also the pride about old traditions and knowledge together with a modern value orientation cannot be “installed” - but can be supported by policy over years or decades only.

One of the main challenges certainly is the fact that in a highly developed country such as Austria labour costs are fairly high. The specialised (or niche) products that were presented are labour intensive and thus cause the effect that most of the products are rather expensive. They may look very nice and fancy and often attract media such as newspapers and TV who are highly interested and report on these products and related events. However, it still seems to be difficult to find the consumers that are willing to pay the higher price.

Another challenge was also stated by most of the participants, tackling the issue of rural exodus.

How to keep the young people interested in staying in the region and/or in engaging in these kinds of businesses? It was reported that there is still a trend of depopulation/brain drain and young people often prefer to migrate to cities due to several reasons (e.g. labour market, education, partnership). Interestingly most of the local representatives also motivate their children to leave the region for the sake of “better” education, calling on them to broaden their horizon with the hope that they will come back some time. The above mentioned strength of combining tradition with a modern openness could be one possible answer to counteract the problem of rural depopulation.

A very specific and important challenge was described in how to upscale from a family owned small-scale production to a more industrial, large-scale production. The niche products that were represented in the market place are usually created by micro firms that produce limited quantities, mainly for local markets.

“Extending the production is often a challenge as one has to jump from producing – for instance – 200 items or kg/year to 20.000!” one of the participants explained. This situation could be true for a farmer who had marketed jam on the weekly farmers market so far and now intends to sell it via a wholesaler (e.g. supermarket chain). Such a change often means that one has to convert into a totally different kind of business, facing several challenges i.e.:

Concluding the fruitful discussions it needs to be pointed out that this report is meant to provide external parties with a glimpse on the diversity of topics that have been tackled during this 2,5 hours event and cannot deliver all the interesting aspects that were raised, for instance also in bilateral talks or in small groups at the stands during the free movement of the participants. However, it can be summarized that both national representatives and internationals guests experienced a very special kind of a market place – leading on the one hand to a better understanding of the NWFP sector in Austria for the bunch of people from abroad, and opening new perspectives on “domestic” challenges via insights from foreign experts to national parties. It was perceived as an excellent opportunity for knowledge exchange by all attendees. 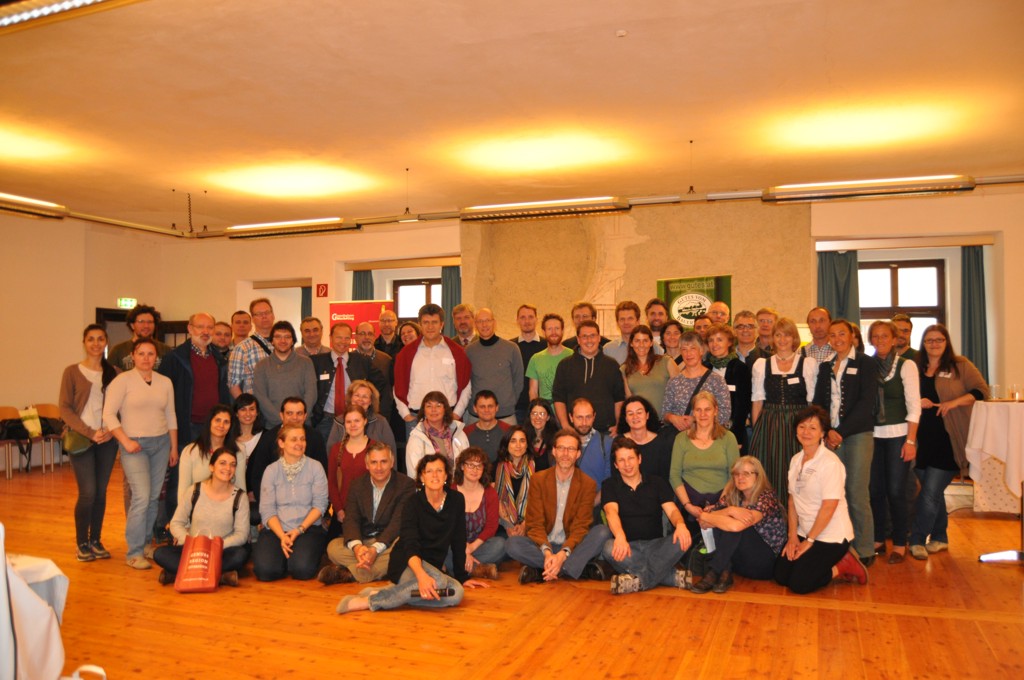