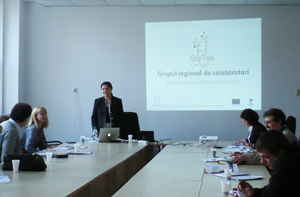 The first meeting of the Suceava Regional Stakeholder Group took place on 25 October 2013.

The purpose of the meeting was to introduce significant Suceava stakeholders to the StarTree project and its objectives. Eight stakeholders attended representing innovation support, regional development, forest management, rural communities and SMEs.

After a general introduction discussions centred around three issues:

Exclusion of commercial pickers – several views on this were expressed:

- SMEs reported that the lack of regulations in the direction of limiting the access of pickers with commercial purposes brings lot of opportunities for the black markets and unfair competition mainly for mushrooms and forest berries.

- National Forest Administration (the main supplier): the chaotic harvesting of mushrooms and berries especially when based on large organized groups for picking is correlated also with important loss of flora biodiversity and results in tons of garbage after the pickers (bags, PETs, etc).

Input from the StarTree project to compare regulation of commercial picking in other regions will be very helpful in this respect.

Innovation support agencies reported that there is a very low value added to NWFP which are mainly sold as raw material, given the lack of infrastructure for processing and depositing SMEs prefer fast selling at low prices. This value addition problem for the collected NWFP in the region needs a holistic understanding, not only foresters should get involve but there is a need for cross-sectorial policies. There is also a lack of education for the final consumers on the national markets which makes internal markets mostly informal (road side markets for mushrooms and berries). There is also a lack of transfer innovation ideas from research to practice.

NGOs were concerned with the chemical quality of some forest fruits which instead of being picked from forests are picked from polluted fields (e.g. near garbage fields).

A number of actions were proposed:

- Suggestions that the local communities get more involved in creating and monitoring financial instruments that can increase their budget.

- The region has a high potential for Bio-certification, the forest already being FSC certified

- The Regional Chamber of Commerce and Industry has expressed a willingness to disseminate relevant information from the project on a special section of their web-side. They are also interested in providing work-shops on how to attract funds in the area of NWFP processing and commercialisation

- Proposal to implement a project on industrial clusters in mountain agriculture that could integrate inputs from StarTree.