HomeNews & Events2nd Meeting of the Stakeholders of the Alentejo Case Study

2nd Meeting of the Stakeholders of the Alentejo Case Study 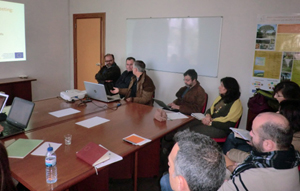 The 2nd meeting with the Stakeholders of the Alentejo Case Study from the StarTree project was held in the Instituto Superior de Agronomia (ISA) in Lisbon, on 11 February 2015. The meeting was held to exchange ideas and suggestions between Stakeholders and the project team based on the fortcoming State of the Sector Report (SOSR). Particular attention was given to add, remove and/or correct information to the body text concerning the Portuguese case study, Alentejo. Thanks to the the active contribution from all participants, useful feedback was received.

Some of the topics on focus were:

- SOSR has no data for lower plants in the Alentejo region.

- The number of products to the Alentejo was much lower than shown in other countries, as well as other participants, and wondered if have been no difference in the indication of the products, some countries indicated all while Portugal listed only the main examples.

- Emerged new proposals to introduce the Alentejo area of study in more class of embedded products, including hunting, botanical tours, mycological, among others.

- It was discussed that in Portugal there are two major challenges have a better idea of the amounts of mushrooms being harvested and the species composition collected every year from forests. One challenge is due to the inexistence of control on harvesting activities and the trade belongs almost exclusively to the "informal" economy. A second challenge relates to mushroom species that are both cultivated and collected from forests, in such cases is not possible to differentiate in the existing statistics the origin of them. It was unanimous that the fenced property acts as a deterrent, but not completely inhibit the illegal practices of collection of these fees.

- It was unanimous that the Summary table of forest law, national forest policy/strategy and national forest programmes and references to NWFP of SOSR will have to be changed, since this indicates that our country does not have forestry strategy or conditioner legislation of NWFP.

- In regard the Conservation Issue would be interesting to complete this analysis with species associated to the Montado which are not necessarily NWFP themselves.

- And the Alentejo region is not completely characterized in the SOSR until one of its dominant forest tree species, the holm oak (Quercus ilex), is not included on it.