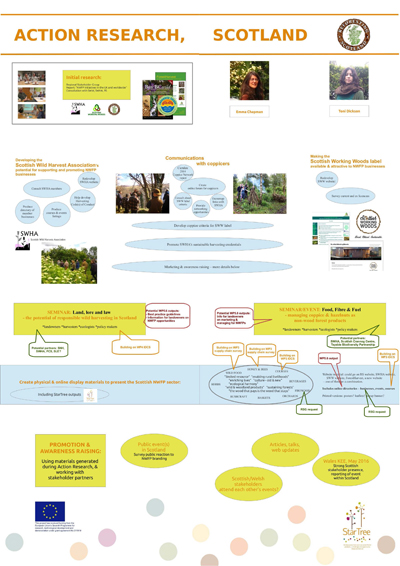 Scotland has a very low proportion of forest cover compared with most of Europe, and much of this is conifer plantations which are harvested by clear-felling.   Forestry management has traditionally focused almost entirely on timber, and more recently has also included amenity, biodiversity and tourism as secondary aims.  However NWFP resource available is relatively small and forest management almost never takes NWFPs into account. Most forestry land holdings are very large, and only 0.1% of the Scottish population owns any forest land. Labour costs are high and the population is mostly urban. As a result of all these factors, most NWFP enterprises involve value-added products, teaching NWFP-related skills, and tourism, rather than bulk raw product, and most NWFPharvesting is done by people who do not own the land on which they are harvesting.

NWFPs which are sold unprocessed include wild mushrooms, moss and bulbs. Among cultivated NWFPs, berries and honey play a part in both the economy and the traditional image of Scotland.  Sport hunting and fishing play a significant role in the economy and the story of Scotland, but land management for hunting in particular may clash with the goals of woodland management and forestry.

There  is limited support for people wishing to set up NWFP businesses, but nevertheless there are many innovative businesses using NWFPs, and also a growing number of people who value NWFPs as part of their lives and livelihoods. In recent decades networks and associations have emerged for people involved in community land ownership, community forestry, land reform, local food, traditional orchards, and wild harvesting in Scotland.